In the 1970s-1980s, most Wisconsin cities began offering to pay all or some of their retiree’s health insurance benefits post-employment. Some organizations allowed employees to exchange post-employment health insurance in lieu of pay increases, and most allowed them to qualify for this coverage until Medicare eligibility at age 65. While it began as a solid strategy to attract and retain quality employees when health insurance premiums were reasonable, as premiums rocketed upward in the midst of the U.S. healthcare crisis and an aging workforce, these plans quickly became unsustainable for the employers and taxpayers.

Some Wisconsin cities still offer these post-employment benefits today which is causing large, incurred, unfunded liabilities. Basically, this means that these cities will not have the money in the future to foot the bill. According to an analysis by the Wisconsin Policy Forum report, “Between 2013 and 2016, the state’s largest 25 cities held unfunded retiree health care liabilities valued at $2.25 billion.”1

Many communities choose not to put any money aside to cover the commitments that remain, opting to pay those expenses from their regular annual budgets. “In 2016, these 25 cities covered the health care costs of their existing retirees, but those payments amounted to less than half of the annual amount needed to pay down their liabilities over the next generation.”2 Clearly something has to give.

Several cities have seen their unfunded commitments decrease from 2013-2016. Twenty-three of Wisconsin’s cities decreased their liability by $120.1 million.1 Great news. But Milwaukee’s and Racine’s costs increased so greatly that it erased the other cities’ combined gains (Milwaukee - $131.4 million, Racine - $96.7 million).2 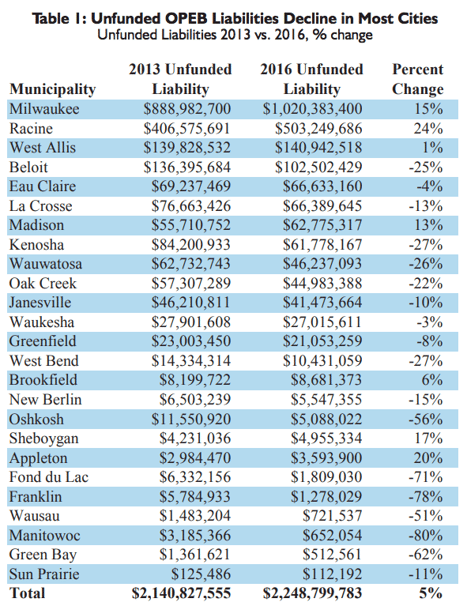 According to the report, some Wisconsin cities could face a tax increase of hundreds or thousands of dollars per resident. Beloit, West Allis, Oak Creek, Racine, La Crosse, and Milwaukee have liabilities over $1,000 per capita. Wauwatosa and Eau Claire trail closely behind with more than $900 per capita.

There is hope. In the face of these budgeting challenges, several cities have been moving in the right direction. Some cities “are cutting their obligations by controlling their overall health care costs or by reducing the benefits offered to future retirees.”2 For example:

It’s not easy trying to find ways to solve these enormous liabilities. A public entity needs to ensure sustainability of the plan, but still honor the retiree’s commitment to public service. A cultural shift in the way employees think about their benefits is often needed. There are many solutions to ease this transition including ways to grandfather longer-term workers and establish different benefits for new hires. Some of the ways our clients have achieved these feats include:

The first step to restructuring is to identify your needs, assess costs and funding options, and then explore restructuring solutions. For a more in-depth look, download our Guide to Restructuring Retiree Benefits. 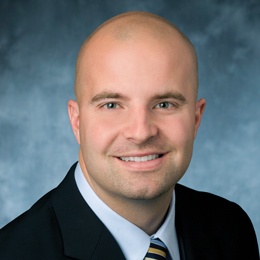 Ken Zastrow enjoys establishing a strong rapport with his clients. He believes that education is key in helping them understand their benefit plans. Ken has a strong background in underwriting and post-employment benefits. As Employee Benefits Consultant at National Insurance Services, Ken is responsible for the overall assessment and management of all an employer’s benefit plans including claim reconciliation, policy changes, renewals, and medical and dental analytics. He is also well versed in compliance, benefit integration, and early retiree benefits. Ken is a licensed insurance agent (Health, Life, Series 6 and Series 63) as well as a registered financial representative with GWN Securities. He works with schools, cities, and counties in Wisconsin.